Reprint of an article run in the Daily Inter Lake newspaper (November 6, 2000) 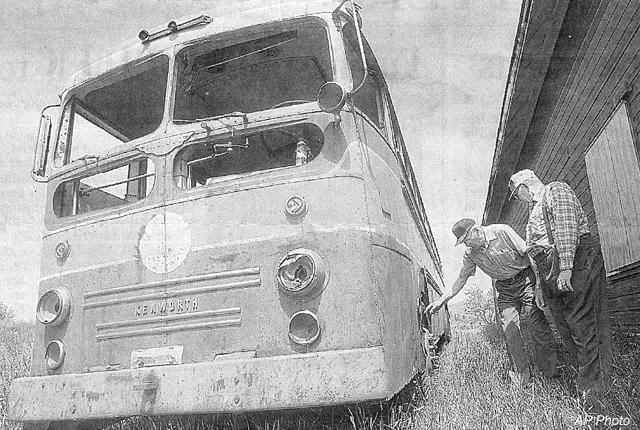 Northern "Bruck" parked at the Montana Veterans home in Columbia Falls. Members of the Stumptown

KALISPELL (AP) - Call it the ultimate shuttle bus. There was no mistaking Great Northern Railroad's "Bruck" as it took its inaugural ride from Whitefish to Kalispell on July 17, 1951.

Call it the ultimate shuttle bus.

There was no mistaking Great Northern Railroad's "Bruck" as it took its inaugural ride from Whitefish to Kalispell on July 17, 1951.

With a gross vehicle-weight rating of 44,000 pounds, a 220-horsepower engine, 10-speed transmission and the railroad's trademark orange-and-green color scheme, the Bruck looked like a train car that had jumped the tracks and sprouted tires.

A half-century later, the Bruck is back, and it sorely needs a facelift.

The sturdy vehicle was spotted at a salvage yard in Great Falls two years ago by railroad buff Larry Hoffman of Michigan, who was attending a convention of the Great Northern Railway Historical Society. Hoffman couldn't believe what he'd found, and he and his wife, Connie, spread the word of the discovery to other railroad enthusiasts.

Larry died several months later, however, before he could acquire the Bruck. Connie purchased the dilapidated vehicle a year ago as a memorial to her husband and donated it to the Stumptown Historical Society.

Now the fun begins, said Frank Gregg, an active historical-society member who used to load baggage on the Bruck. The plan is to restore the vehicle to its original condition — first the exterior, then the interior, and if money is available, the engine.

Two weeks ago, the Bruck was hauled on a flatbed truck from Great Falls to a secure location in Columbia Falls, courtesy of Harp Line Construction.

Some society members envision driving the Bruck in local parades one day. Others say it's more realistic to figure it will be a static display at the depot.

The unusual bus-truck combination was one of a kind, custom-built by Kenworth Motor Truck Corp. and designed by a Kenworth distributor in Billings. Kenworth made a few smaller Brucks over a two-year period, but the vehicles never caught on outside Montana.

Its heyday came at a time when Great Northern wanted to cut expenses yet retain its passenger base, which was being lured away by better roads and cars.

The Bruck replaced the popular gas-electric Galloping Goose, the one-coach railroad motor train that transported passengers, mail and freight from Kalispell to Whitefish and Columbia Falls.

When Great Northern moved its division point from Kalispell to Whitefish in 1903, the railroad still needed a way to shuttle passengers and freight from bustling Kalispell to catch the main-line trains at Whitefish or Columbia Falls. A "dinky" was used until the Galloping Goose came on line in 1923.

The Bruck was a workhorse, recalled Orris Kastella of Whitefish, who spent 30 of his 46 years with the railroad handling baggage and freight. It averaged six round trips to Kalispell every day for 20 years. Kastella loaded everything from Nabisco cookies to Sears catalogs on the Bruck.

Christmas was the busiest time of year, Kastella said, occasioning frequent visits from the trainmaster, who insisted the Bruck be unloaded quickly so the train could meet its schedule.

The front section was built like a school bus, with room for 20 passengers; the rear was equipped to carry seven tons of freight.

When Amtrak took over rail passenger service in 1972, the Bruck was put out to pasture, and its history since then is unclear.

"I heard some guy in Great Falls used it as a hippie bus for a while," Gregg said.

He marveled that the tires, marked with the Great Northern emblem, still hold air after more than 30 years.

Stumptown Historical Society  is accepting donations to renovate the Bruck. Gregg estimated the project may cost as much as $50,000.

The society is also looking for old photographs of the vehicle, because there are none in the local archives.